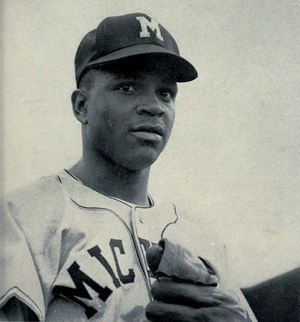 With the University of Michigan team in 1956

" . . . a sure major league prospect" - Freddie Lindstrom, at the time baseball coach at Northwestern University, about Don Eaddy of the University of Michigan

Don Eaddy, who had a brief major league career, was a big college star and played for years in the minors and in the Caribbean.

Eaddy attended Ottawa Hills High School, then was a three-sport star at the University of Michigan and helped the baseball team coached by Ray Fisher to a national championship in 1953. He was an All-American third baseman as a senior and led the Big Ten Conference in stolen bases. He graduated with a bachelor of science degree. Heavily recruited, he signed a major-league contract with the Cubs under the bonus rule limit and started in the minors in 1955, splitting the season between Des Moines of the Western League and the Burlington Bees of the Three-I League. With Des Moines, he started a triple play at shortstop in his first professional game, then went to Burlington where he hit .304 in 32 games. He attended the Cubs' spring training in 1956, getting a look as a center fielder, then was sent back to Des Moines and was hitting .390 in 11 games when he was called up to serve in the United States Air Force. He served in the Air Force from 1956 to 1958, missing those seasons and doing considerable damage to his status as a top prospect.

Upon his return to baseball in 1959, he was allowed to be kept on the Cubs' roster as a 26th player, because of his status as a veteran. He played briefly early in the season, then was sent down to the Lancaster Red Roses of the Eastern League. He was promoted to the Fort Worth Cats of the Texas League in June, and in late July returned to Chicago, where he got the bulk of what little major league playing time he would accumulate. He appeared in 15 games for the Cubs, 14 times as a pinch runner, scoring 3 runs. He played one game in the field, at third base on August 1st, against the Cincinnati Redlegs. He replaced Art Schult in the bottom of the 5th inning. He committed an error in the bottom of the 6th on a Roy McMillan ground ball that scored Jerry Lynch. He then batted against Bob Purkey in the top of the 7th and struck out.

After the season, he was sent outright to Fort Worth, as he was by now out of options. In Cuba that winter, he led the league in walks and helped Cienfuegos win the 1960 Caribbean Series title. He stayed in the Cubs organization for five more seasons, playing in San Antonio in the Texas League and at Salt Lake City in the Pacific Coast League. In the book I Will Never Forget: Interviews with 39 Former Negro League Players, Paul Casanova recalls that he and Don Eaddy were the only two black players on a team at one point (San Antonio in 1962), and upon arriving in Austin, TX were not allowed to stay at a hotel because they were black. In 1963, Eaddy contracted hepatitis but in the winter played in Nicaragua for Cinco Estrellas, batting .347 and leading them to a win in the International Series. That winter, Cubs second baseman Ken Hubbs died in an airplane clash, and Eaddy was seen as a potential replacement. He failed to grab the job in spring training and returned to Salt Lake City for the 1964 season, where he played 137 games and hit .271. He called it quits at the end of the year.

After his baseball days he was a Burger King franchisee. In 1996 he was inducted into the Grand Rapids Sports Hall of Fame. He died of cancer in 2008.