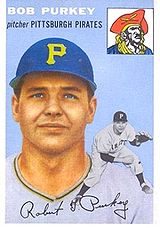 "[Branch] Rickey took me aside for ten pitches and taught me how to throw a knuckleball. . . Against Pittsburgh that day I threw 96 knuckleballs . . ." - Bob Purkey

Knuckleballer Bob Purkey pitched thirteen years in the majors, posting a 129-115 overall record. In 1962, he was third in the Cy Young Award voting. He was brother-in-law of Charlie Rabe.

Signed by the Pittsburgh Pirates in 1948, Purkey came to the majors in 1954 but didn't manage a winning record with them (the team was always well under .500). After the 1957 season he was traded to the Cincinnati Reds and immediately blossomed, going 17-11 and getting named to his first All-Star team in 1958. When he hit a grand slam in 1959, it would be the last grand slam by a Reds pitcher until Anthony DeSclafani in 2018. He went 17-11 for the club again in 1960 and 16-12 in 1961, as the Reds reached the World Series. In the postseason against the New York Yankees, he threw a complete game but took the loss in Game 3 and was in a later game used out of the bullpen. He had his best season in 1962, going 23-5 with a 2.81 ERA and 18 complete games and finishing tied for third in Cy Young Award voting behind winner Don Drysdale.

Purkey remained in the rotation for the Reds through 1964 and then pitched for the St. Louis Cardinals in 1965 and the Pirates in 1966. Although his ERA was 1.37 in 10 games for the Pirates, he was released in August.

His son Bob Purkey Jr. was drafted in 1973 but died that year following a contest of holding breath underwater with college teammates.

Purkey later established an insurance agency in Pennsylvania which he ran for over 30 years.