Dolphin Stadium is one of the names of the home of the Florida Marlins from 1993 to 2011; it was also known as Sun Life Stadium during its last season of use as a major league ballpark. 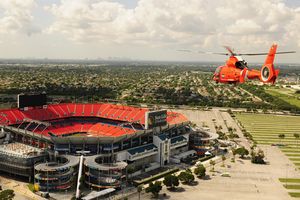 The former Dolphin Stadium (originally known as Joe Robbie Stadium and later called Pro Player Stadium and finally known as "Sun Life Stadium") opened as the home for the NFL's Miami Dolphins in August 1987. From 1988 to 1992, the park was used as the site of some spring training games before the expansion Florida Marlins began play in 1993. The park featured a pitcher's mound that could be raised and lowered below the field, helping in the park's conversion from baseball to football. In addition, the second-deck outfield seats are covered by canvas and not used for baseball. The stadium's parking facilities include space for 14,970 cars and 254 buses, plus a helipad.

All of the Marlins owners from Wayne Huizenga to John Henry to Jeffrey Loria attempted to secure government financing to build a baseball-only facility to replace Dolphin Stadium, but government leaders balked at the moves. After the 2005 season, Loria announced that without a new ballpark, the Marlins would leave Florida. A deal for a new stadium was finally reached early in 2008. The Marlins moved into Marlins Park, located in downtown Miami, FL in 2012, taking the name Miami Marlins at the same time. 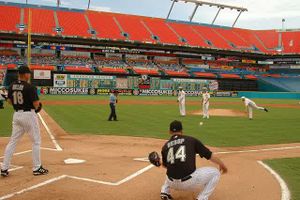 Dolphin Stadium has hosted two World Series champions, in 1997 and 2003, which puts it in elite company among stadiums.

It was named for a time after Pro Player, Inc., a jersey and hat manufacturer; the company declared bankruptcy in 1999 but the name was kept for a number of years afterwards. In 2005, Huizenga (still the owner of the Dolphins) announced the stadium would change its name to Dolphin Stadium. New corporate naming sponsors were found for short terms starting in 2009, making it difficult for anyone to track the ballpark's exact name over the years.