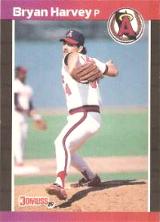 Pitcher Bryan Harvey was signed as a free agent for the California Angels by scout Alex Cosmidis on August 20, 1984.

After a stellar season in 1991 when he won the American League's Rolaids Relief Award, Harvey was slowed down by a hurt elbow in 1992. Thinking that his career was over and wanting to be off the hook for the expensive four-year contract he had signed prior to his injury, the Angels left Harvey unprotected in the 1992 expansion draft. He was picked up by the Florida Marlins and was outstanding for his new team during their 1993 maiden season. He saved the first game in team history, and overall notched 45 saves - a record for an expansion franchise - with a 1.70 ERA, earning a return trip to the All-Star Game. However, the elbow problems came back in 1994, and Harvey pitched only 13 more games before ending his career in 1995.

Harvey threw a fastball and forkball.

After spending time as a scout, Harvey joined the Asheville Tourists as pitching coach in 2007. He was the pitching coach for the Tulsa Drillers in 2009-2010.

Harvey's son, Kris Harvey, was selected by the Marlins in the second round of the 2005 amateur draft, and another son, Hunter Harvey, was picked 22nd overall by the Baltimore Orioles in the 2013 amateur draft. His father, David Stanley "Stan" Harvey [1], was a standout slow-pitch softball player who was named to the Amateur Softball Association of America's National Softball Hall of Fame in 1996. Stan earned All-American honors nine times, including four years in succession (1973-1976), and was a member of five national championship teams with Howard's Furniture-Western Steer. Bryan's brother, Dwayne Harvey, was a 25th-round choice by the Chicago White Sox in the 1988 amateur draft and pitched in three games for the Sox's Gulf Coast League team that summer.