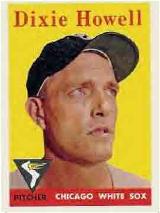 Dixie Howell holds three of the weirdest major league records. First, Howell's 1957 batting line is the all-time single-season record for most hits (5) without a single, tied with Rick Wrona in 1994. Second, he is the last relief pitcher to hit two home runs in one game: he did this against the Washington Senators on June 16th that year. Third, Howell holds the record for the longest time between when he first pitched in the majors and when he got his first victory. He broke in during the 1940 season, with the Cleveland Indians but didn't get a major league victory till 1955, his rookie season with the Chicago White Sox at age 35, when he got 8.

Dixie Howell served for the U.S. Army in France and Belgium during World War II and was a German POW for five months.

He pitched for the Indians, Cincinnati Reds and White Sox for six years in the majors, and for 19 years in the minors. He pitched a no-hitter for the Minneapolis Millers against Columbus in the American Association, on August 10, 1950.

He married Helen Belecki on May 24, 1941. They had four children: Carol Ann, Shirley Jean, Millard Jr., and Stephen Paul. He died near the end of his baseball career at age 40 after suffering a heart attack during a spring training workout in 1960 and is buried at Oak Lawn Cemetery in Wilkes-Barre, PA. He should not be confused with the Millard (Dixie) Howell who was a college football star and played minor league baseball from 1935-1942.