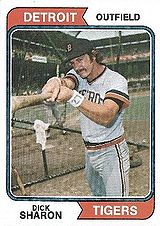 Dick Sharon spent nine years in professional baseball, including three years in the major leagues. Noted primarily for his defense and some power, Sharon did not hit above .270 at any stop in his pro career.

The first pick of the Pittsburgh Pirates in the 1968 amateur draft, Dick was the 9th overall selection. He had been an All-League star in baseball, basketball and football in high school. He began his career with the GCL Pirates, hitting just .111/~.253/.136 with 29 strikeouts in 81 at-bats. One imagines that the only thing keeping his baseball career alive at that point was the fact that he had been a #1 pick and the club needed to save face. In 1969, Sharon was with the Gastonia Pirates and improved marginally, producing at a .216/~.296/.300 clip. On the positive side, he led Western Carolinas League outfielders in putouts, with 226 to his credit.

Dick made it to AAA with the 1972 Charleston Charlies and batted .268/~.327/.452 to set a career high in batting average. He stole 15 bases in 20 tries and hit 14 homers and seven triples. That winter, Pittsburgh traded him to the Detroit Tigers for Jim Foor and Norm McRae.

Sharon started 1973 with the Toledo Mud Hens and despite poor production (.208/~.309/.333), he got called up to the Tigers after 16 games in Toledo. He made his debut as a defensive sub on May 13th and doubled in a run against Mike Kekich of the New York Yankees in his first at-bat a day later. He hit .242/.280/.410 with Detroit, showing good power (above league-average slugging), starting some times in right field and coming in other games as a defensive replacement. He was used primarily in a platoon role, which made sense as he hit .272/.300/.500 against left-handers and just .188/.246/.250 against righties. He was named the Tiger Rookie of the Year.

That October, he was sent to the St. Louis Cardinals for faded star Willie Davis. Then he was flipped over to the California Angels two months later for Bill Rothan. And two months after that, he got traded with John Balaz and Dave Machemer to the Boston Red Sox for Dick Drago, but he never played in the majors for any of these teams.

Sources include 1969-1977 Baseball Guides, The Big Book of Jewish Baseball (Sharon had a Jewish father but was not halachically Jewish)

Dick Played for the Bayamon Cowboys of the Puerto Rico Winter Baseball League.