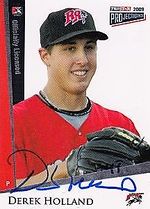 Derek Holland was drafted by the Texas Rangers as a draft-and-follow pick in the 25th round of the 2006 amateur draft on the recommendation of scout Rick Schroeder. After a second year of junior college, he was signed by scout Jeff Wood for $200,000 and made his pro debut in 2007.

Holland had a string of 3 shutouts in 5 starts pitching for the Texas Rangers in July of 2011, capping it with a 3-0 whitewash of the Toronto Blue Jays on July 30th. That gave him four shutouts for the year, the most by a Rangers pitcher since Doc Medich pitched as many in 1981, and the most in the American League that year. He finished the year 16-5 and had a great start in Game 4 of the 2011 World Series, shutting out the St. Louis Cardinals on 2 hits over 8 1/3 innings.

On March 20, 2012, Holland signed a five-year contract with the Rangers, worth $28.5 million. he had two solid seasons in 2012 and 2013, going 12-7, 4.67 the first year and 10-9, 3.42 the second. He made 33 starts that latter season and pitched a couple of shutouts. He pitched a third of an inning in relief in the 2012 Wild Card Game aginst the Baltimore Orioles on October 5th. He came in relief of Yu Darvish with two outs in the 7th and Robert Andino on second base, with Baltimore ahead, 2-1. He immediately threw a wild pitch to send Andino to third, than allowed a single to Nate McLouth that made the score 3-1, made an error on a pick-off attempt at first base to move McLouth over, then finally ended the inning by striking out J.J. Hardy; the Rangers went on to lose the game, 5-1 to end their season on a disappointing note.

In early January 2014, he had what the team described as a "freak accident", falling down stairs at home and landing on his left knee. He underwent arthroscopic surgery on January 10th and had to miss the start of the season as a result. After the surgery, Holland explained that his dog, named "Wrigley", had pushed him while running up the stairs, causing the fall and the injury. He was limited to 6 appearances that season, all of them in September as his recovery from the surgery took some time, but was a solid 2-0, 1.46. He had a 25/5 K/W ratio in 37 innings, showing that he was back in full health. He started the Rangers' home opener on April 10, 2015, but lasted only one inning, as he had no velocity on his fastball. He was diagnosed with a strain in his left shoulder, putting him out for at least two months. In fact, he only came back on August 19th, when he was a 7-2 winner over the Seattle Mariners. On August 30th, he showed he was back at full strength when he pitched a complete game shutout over the Orioles, 6-0. It was his first complete game or shutout since the 2013 season. he finished with a record of 4-3, 4.91 in 10 games, then in the postseason, manager Jeff Banister picked him over the team's top winner in the regular season, Colby Lewis, to start Game 4 of the ALDS against the Toronto Blue Jays. It did not go too well, however, as he gave up 6 runs in 2 innings, with Josh Donaldson, Chris Colabello and Kevin Pillar all going deep against him, and he was replaced by Lewis after allowing the first two batters to reach in the 3rd (both eventually scored). He was charged with the Rangers' 8-4 loss.

He was involved in a controversy at the start of the 2019 season. He began the year in the starting rotation of the San Francisco Giants but went on the injured list on April 29th due to what the the team described as a bruised finger. However, after he was reactivated on May 8th, he complained that the injury had been "fake" and simply a ploy for the Giants to send him to the bullpen. Team President Farhan Zaidi denied that there were any shenanigans involved, and that sometimes a player and the team will disagree on the extent of a particular injury. He made 7 starts in 31 appearances for the Giants, going 2-4, 5.90 then on July 26th, was sold to the Chicago Cubs. There, he finished the year by going 0-1, 6.89 in 20 games, all but one of them as a reliever. He joined the Pittsburgh Pirates for 2020, where the plan was to use him as a starter. In that unusual season, he was sitting in the stands during a game against the St. Louis Cardinals among a group of other inactive and socially-distanced Pirates players, when he was ejected by home plate umpire Jordan Baker, who took offense to some remark he made about his pitch calling. This would normally have gone unnoticed, but in an empty ballpark, words carry a lot further, and he was the first player to be run up that season. Manager Derek Shelton came out to argue the decision, which led to a bizarre image of Shelton adjusting his facemask on the way while Baker pulled his out of his back pocket and put it on before the two went at it verbally - but at a safe distance. On August 8th, he had a nightmarish start against the Detroit Tigers when the 1st inning started off with a homer by Niko Goodrum, a single by Jonathan Schoop, a homer by Miguel Cabrera, a homer to C.J. Cron and a homer to Jeimer Candelario before finally recording a first out. He ended up allowing 9 runs on 13 hits in 5 innings and was charged with his first loss of the season, 11-5.