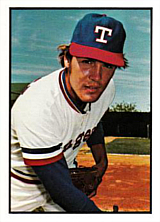 "It certainly was a great thrill. And someday he can tell his grandchildren that he hit against me." - Doc Medich joking about facing Hank Aaron

George "Doc" Medich, who became a doctor while playing in the big leagues, had an 11-year major league career with a record of 124-105. In 1974, he won 19 games for the New York Yankees. While playing in Texas, Medich actually went into the stands to give CPR to a stricken fan, saving the fan's life.

Medich's first start in New York was in the 1972 Mayor's Trophy Game, which was part of annual series the Yankees played against the New York Mets. Medich and Charlie Spikes were called up (though no official roster move was necessary, as it was an exhibition game) and Medich started and pitched fairly well. Medich's first official start, later that year, could not have gone any worse. After giving up two hits and two walks, allowing two runs, Medich was pulled without recording an out. His team had batted around in the top of the 1st inning, so Medich himself had gotten on base (with a walk) before he ever started pitching in the majors. As he did not pitch again that year, he had an infinite ERA for the season.

Medich wasn't always known as "Doc". He was George Medich until he began medical school the day after his major league debut. Since medical school is unusual for major leaguers, he soon became "Doc". His last major league appearance was in the 1982 World Series, pitching for the Milwaukee Brewers. He allowed 4 runs in 2 innings in a 13-1 loss to the St. Louis Cardinals in Game 6 of what was the only postseason appearance of his career.

In 1983, the year after his career ended, he was charged by Pennsylvania authorities with writing seven improper prescriptions. His lawyer, Lawrence Zurawsky, called it a "cry for help" and said Medich struggled with drug addiction for years. As of 2006, his license remained suspended and the American Academy of Orthopedic Surgeries had voted to expel him.

The website http://www.lonestarball.com names Medich 42nd on the list of the all time best Texas Rangers, and includes a lengthy biography.