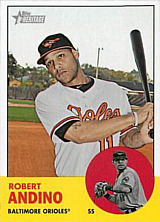 Robert Andino was a key component to sinking the Boston Red Sox playoff hopes on the final day of the 2011 season. With two outs in the bottom of the 9th at Camden Yards, Andino singled against Jonathan Papelbon to drive in Nolan Reimold and give the Baltimore Orioles a 4-3 victory and seriously damage Boston's Wild Card dreams. Moments later, Evan Longoria of the Tampa Bay Rays slugged a walk-off home run against Scott Proctor of the New York Yankees to extinguish Boston's playoff hopes and earn Tampa Bay the AL Wild Card. The following season saw the addition of a second Wild Card team in each league, killing the chances of similar happenings in the future. The 2011 season was Andino's most prolific in the bigs. He played 139 games, batting .263/.327/.344 with a career best 120 hits and 36 RBI.

He was originally signed by the Florida Marlins and scout John Martin as a 2nd round pick in the 2002 amateur draft. Debuting in September 2005, Andino's first big league home run, which came three years later, was a doozy. He took new New York Mets reliever Matt Wise deep with a walk-off home run for a 5-4 Florida victory in the second game of the 2008 season. He was swapped to Baltimore the following year in a deal of players out of options and saw semi-regular action in 2011 and 2012 for the O's. Robert only played 42 more big league games after this peak, serving a 50-game suspension after testing positive for Adderall in 2017, his final professional season.