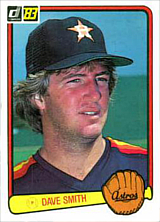 Pitcher Dave Smith was signed as an 8th round pick in the 1976 amateur draft by the Houston Astros and scout Bob Cluck.

Smith is the Astros' all-time leader in games pitched, making 563 appearances for the team (all but one in relief). He also saved 199 games for the Astros, second behind Billy Wagner, with his personal best of 33 coming in the team's 1986 division-winning season; he had six seasons of 20 or more saves for Houston.