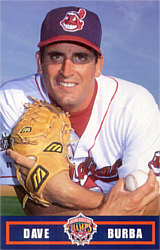 "For me, it was a dream come true to be the Opening Day starter on a big-league team... I can't say I'm not excited to be here, because I am. But I dreamed my whole life of being an Opening Day starter, and they pulled the rug out from under me." - Dave Burba, after being dealt cross-state prior to Opening Day in 1998

A dependable if rarely dominant right-handed hurler, Dave Burba bounced from the Seattle Mariners to the San Francisco Giants to the Cincinnati Reds before finding a home as a mainstay in the Cleveland Indians starting rotation. During his career, he relied on a sinker and slider.

After graduating from the Ohio State University and reaching the big leagues with the Mariners in 1990, Burba was sent to the Giants in December 1991, along with pitchers Bill Swift and Mike Jackson, for slugger Kevin Mitchell and southpaw Mike Remlinger. He worked mostly from the bullpen in San Francisco, posting a 10-3 record, including an 8-game winning streak, for the 1993 NL West runners-up – a team which missed the playoffs despite winning 103 games. Not until the Giants dealt him to the Reds in July 1995 did he get a chance to start regularly. After totaling 22 wins for Cincinnati in 1996 and 1997, Burba joined the Indians' AL Central dynasty when the Reds traded him for first baseman Sean Casey on March 30, 1998, mere hours before he was slated to be the club's Opening Day starter. Growing up a Reds fan in Springfield, OH, Burba was stung by his abrupt departure.

But instead, he harnessed his aggravation into results on the mound. On June 7, 1998, Burba exacted a measure of revenge against his old team, pitching Cleveland to a 6-1 win at Cincinnati during an interleague series and also clubbing a two-run homer, becoming the first Tribe pitcher to go deep since the advent of the DH. He solidified the Indians' often shaky rotation, topping 200 innings for the first time, winning 15 games with a 4.11 ERA and adding victories vs. Boston in the ALDS and vs. New York in the Tribe's six-game loss to the Yankees in the League Championship Series. He continued to be a solid innings eater for Cleveland in 1999 and 2000 while racking up 31 wins against 15 losses. Burba lost his touch in 2001 however, as his ERA soared above 6.00. From 2001 through 2005, he did his best to resurrect a career that had covered 19 years, from humble beginnings with the Salinas Spurs in the 1987 California League. His last game in the majors, after 15 seasons, came on September 19, 2004, back with the Giants. In 2005, Burba went 4-3 with a 4.58 ERA for the Triple A Round Rock Express, bringing a wrap to his career. In the bigs, he made 511 appearances to a 115-87 record, 4.49 ERA and 1,398 strikeouts.

In 2011, Burba began his coaching career as pitching coach of the Tri-City Dust Devils, a role he continued in 2012. He moved to the Modesto Nuts in 2013-2014 and was with the New Britain Rock Cats in 2015, the Hartford Yard Goats in 2016-2017 and the Lancaster JetHawks in 2018-2019. He was scheduled to coach the Boise Hawks in 2020 before COVID-19 forced the cancellation of the minor league season. Burba returned to the field in 2021 with the ACL Rockies and continued coaching there in 2022. In addition to coaching for the Rockies, in 2018 Burba served as the pitching coach for the Salt River Rafters in the Arizona Fall League.

He is the nephew of pitcher Ray Hathaway, who played for the Brooklyn Dodgers.