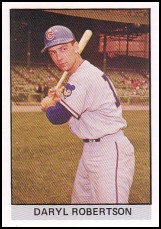 Infielder Daryl Robertson was signed by the New York Giants prior to the 1954 season and made his pro debut that year with the Danville Dans. After hitting 14 home runs in the next two summers, he was drafted by the Milwaukee Braves after the 1956 season. He hit a career-high 16 homers for the Topeka Hawks in 1957 and was a Northwest League All-Star for the Yakima Braves in 1959, when he hit .315 with 11 home runs for the team.

Prior to the 1961 season, Robertson was traded to the Chicago Cubs with Andre Rodgers for Moe Drabowsky and Seth Morehead. He spent that year with the San Antonio Missions, hitting .261 with a dozen home runs. He reached the majors with the Cubs in May 1962, appearing in 9 games that month. In his brief cup of coffee in the majors, he went 2-for-19 and made five starts at shortstop. The following month, he was dealt to the St. Louis Cardinals along with Bobby Gene Smith for Alex Grammas and Don Landrum. Robertson played for the Little World Series champion Atlanta Crackers after the trade but never again played pro ball following that season.

Through 2019, he is the only major league player born in Cripple Creek, CO. Along with Daryl, one other player was born in Colorado in January, 1936 - Chuck Cottier. Robertson and Billy Cowan both went to the University of Utah; Daryl played with the Cubs in 1962 while Billy started with them in 1963.