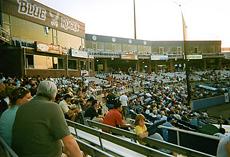 Judy Johnson Field at Daniel S. Frawley Stadium in Wilmington, DE, is the home of the Wilmington Blue Rocks, the Washington Nationals' South Atlantic League farm team. The Delaware Sports Museum and Hall of Fame is also located at the stadium.

The team is named for the blue granite that lies along the Brandywine River. A decorative chunk outside the main entrance prompted one arriving fan to say, "That Blue Rock must be a first baseman - doesn't look mobile enough to play any other position."

Opened as Legends Stadium in 1993, the ballpark was renamed a year later for the Wilmington mayor who brought affiliated baseball back to the First State's largest city. The field is separately named for local Negro Leaguer William Julius "Judy" Johnson, who captained a team that included legends Satchel Paige and Josh Gibson. Main signage captures both names and a bronze statue of Johnson stands outside the ballpark's main gate.