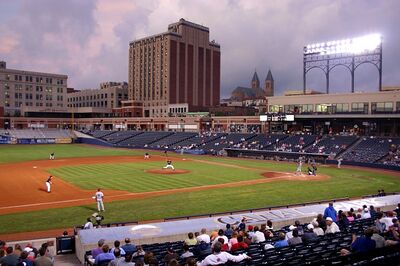 Canal Park in Akron, OH, is the home of the Akron RubberDucks, the Cleveland Guardians' Eastern League farm team. It salutes Akron's status as the rubber capital of the world with its clock tower, which is modeled on the iconic one at Goodyear Tire and Rubber.

Akron is also the gravity racing capital of the world, and the Soap Box Derby Parade of Champions starts at the ballpark. As beautiful on its own as has come to be expected from architect HOK Sport (now Populous), its view of downtown Akron is a real plus.

The stadium name salutes the nearby Ohio and Erie Canal, which opened up the then-frontier state in 1825.

The franchise remains a Cleveland affiliate - now the seventh longest partnership among teams without common ownership. Of course, the nearby parent could veto any other affiliation. Proximity not only saves travel costs but eases rehabilitation assignments.

How did a professional baseball club move into separate new stadiums in the same market just eight years apart? Munson opened the year after HOK's new Buffalo Bisons' stadium did. That project, in retrospect, is regarded inside baseball circles as the beginning of HOK's downtown retro concept - but the minors are the minors and the general public didn't notice. That changed at the speed of a fastball with the 1994 opening of HOK's first MLB stadium, Oriole Park at Camden Yards. Once Akron decided to build a new ballpark and signed that architect, the Canton stadium never had a chance of retaining the club.