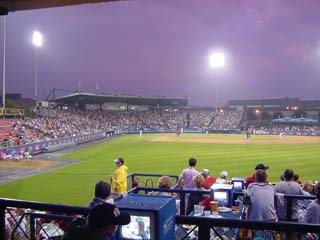 FirstEnergy Stadium, in Reading, PA, is the home of the Reading Fightin Phils, the Philadelphia Phillies' Double-A Northeast farm team, and hosts even-year games in the annual "222 Showcase" series with Triple-A Philly farm-mates the Lehigh Valley IronPigs. It is the league's oldest park - by 36 years! It opened as Reading Municipal Memorial Stadium in 1951.

Promoted as "Baseballtown" and "America's Classic Ballpark", it is reminiscent – or is that "preminiscent"? – of “downtown retro” parks. The first U.S. baseball stadium to draw 10 million fans while hosting only Double-A or lower clubs, in its 65th season, it twice topped its one-game gate record. City and state officials are working to bring it up to post Major League Baseball-reorganization standards.

The ballpark was home to the Reading Indians from 1952 to 1961. In 1963 and 1964, the Reading Red Sox called the ballpark home before the Indians returned for the 1965 season. The Reading Phillies began play there in 1967 and have remained there ever since, only changing names in 2012.

In 2002, FirstEnergy Stadium became the first ballpark to win the annual Ballpark of the Year Award.