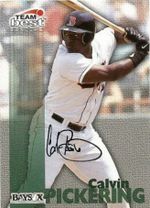 Calvin Pickering is the tenth man from the U.S. Virgin Islands to play in the majors. He is the third from St. Thomas. Pickering moved to Tampa as a teenager and was selected by the Baltimore Orioles in the 35th round of the 1995 amateur draft. The huge power-hitting youngster soared through the Orioles minor league system, and made his major league debut in 1998.

However, Pickering quickly encountered problems, never really being able to unseat the incumbent at first base, Will Clark, in 1999 and was let go in 2001 in a trade to the Cincinnati Reds. Pickering played four games with the Reds before being claimed off waivers by Boston. Pickering went on to spend the 2002 season on the disabled list. He spent the 2003 season with Veracruz of the Mexican League, and after having a big year there, was later purchased by the Reds and finished that year with the Louisville Bats. Pickering then went on to the Kansas City Royals as a free agent at the end of the 2003 season where he finally got a chance to blossom somewhat. In 2004, he batted .246 with 7 HRs and 26 RBI. The next year, in 2005, Pickering made the opening day roster, though he struggled and was soon optioned to the Omaha Royals.

Pickering finished his major league career with a .223 average, 14 HR, and 45 RBI. In late 2005, he signed with the SK Wyverns of the KBO for $100,000. After half a season there, he came back to America. He spent 2007 with the Kansas City T-Bones in the independent Northern League. In 2008, Calvin played with the Bridgeport Bluefish of the Atlantic League and then returned to the Northern League with the Schaumburg Flyers.

Pickering became a coach with the Aberdeen IronBirds in 2015.