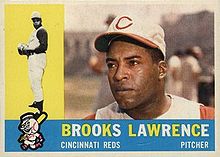 He pitched one year for Miami University of Ohio (1948), then two in the Negro National League (1948-1949) before he was signed by the Cleveland Indians in 1949. During this time, he also worked as a sand-blaster in construction projects. He pitched two years for the St. Louis Cardinals (1954 and 1955), five years for the Cincinnati Redlegs (1956-1960) and eleven different minor league teams (1949-1960). He also played winter ball in the Caribbean.

His best year in the minors was in 1953 when he was 18-13 with an ERA of 2.37 with the Portsmouth Merrimacs in the Piedmont League. He was 76-72 lifetime in the minors. After retiring as a player, Lawrence worked ten years at International Harvester in Springfield and then spent ten years handling scouting, minor league player development, radio and television work and season-ticket sales for the Reds. He was head coach of Wilmington College from 1988-1992. He died of cancer at age 75 at Mercy Hospital in Springfield and is buried in Ferncliff Cemetery in Springfield.