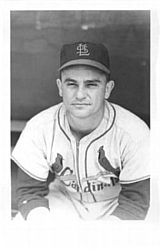 Jackie was in Rochester again in 1952, going 9-10 with a 3.77 ERA. One of his wins was a 9-0 no-hitter over the Ottawa Athletics on September 5. Again, he got a late season look, pitching only three innings with no decisions. Jackie started the 1953 season with the Cardinals but, after no decisions in seven games, he was traded to the Cincinnati Reds on May 22 for Eddie Erautt. Collum won 23 games over the next three seasons with Cincy, while alternating between starting and relieving. He was reacquired by St. Louis in 1956 and finished 6-2 with seven saves, primarily working out of the bullpen. Between 1957 and 1962, he was in and out of the majors with several teams, the Chicago Cubs and Brooklyn Dodgers in 1957 and the Los Angeles Dodgers]] in 1958. After a few years in the minors, he resurfaced in 1962 with the Minnesota Twins and Cleveland Indians. He finished his major league career 32-28 with a 4.15 ERA. A good hitting pitcher, he had a batting average of .246 (29-for-118). Altogether, Collum spent 16 seasons in baseball from 1947 through 1962, retiring at 35. In the minors, he appeared in 405 games, going 128-95 with a 3.32 ERA in 1,932 innings. His career batting average in the minors was a good .269.

After baseball, Collum became the owner of the Pioneer Oil Company in Grinnell, IA. He died there in 2009.