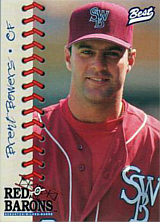 Brent Bowers hit .308 in 21 games with the 1996 Baltimore Orioles. In the minors, he stole 36 bases in 1993 in Double A and had 11 triples the next year, also in Double A in the Toronto Blue Jays organization. Moving to the Baltimore organization in 1996, he hit over .300 at all three of his stops, with Bowie, Rochester, and the parent club. In 1997, moving to the Philadelphia Phillies organization, he was about to be recalled to the bigs to replace right fielder Danny Tartabull, who suffered a season-ending foot injury, but he tore his hamstring that day and never got the call again. He came back to the Blue Jays organization in 1998, played for the 1999 Hyundai Unicorns and was in the Cincinnati Reds organization in 2000.

He was the manager of the Windy City ThunderBolts of the Frontier League in 2005 and 2006. He became manager of the Edmonton Capitals in the Golden Baseball League in 2009, but in 2010 was suspended for two games by the league after lashing out with a homophobic tirade against umpire Billy Van Raaphorst after being ejected from a game on July 31st. Van Raaphorst's colleagues rallied around him after the initial suspension was announced, eventually forcing the league to extend the suspension to the remainder of the season. Bowers chose instead to resign in disgrace on August 7th and was replaced by hitting coach Gordon Gerlach.