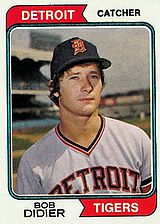 Catcher Bob Didier was selected by the Atlanta Braves in the fourth round of the 1967 amateur draft. He reached the majors as a 20 year old in 1969 and was a regular for the Braves' division-winning club that season. He played in fewer games each year of his six year major league career, even though his batting average improved during four of those years. During his time with the Braves, he became the preferred catcher of knuckleballer Phil Niekro. After his major league days, he played for the Iowa Oaks in 1975 and was a player/coach for the Richmond Braves in 1976.

After spending two years as the Arizona Diamondbacks minor league catching coordinator, he became manager of the Yakima Bears in 2008.

Didier's uncle was Gerald Didier, a minor league infielder, and his father was Mel Didier, who was a minor league pitcher, major league scout, and farm director for the Montreal Expos in the mid-1970s. His grandfather Ray Didier coached college baseball for 40 years. Bob's son, Beau Didier, was drafted in the 40th round of the 2008 amateur draft out of high school, but headed on to Louisiana State University.