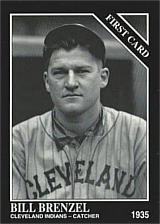 Bill Brenzel played three years in the majors, but was a fixture in the Pacific Coast League for far longer. He was with the Mission Reds for parts of five seasons, the San Francisco Seals for part of one season, and the Hollywood Stars for six seasons. In all, he played 17 seasons in the minors. He also managed once in the PCL, with the Spokane Indians in 1965, and in the lower minors two other years.

Bill was born in Oakland, CA, a few years before the DiMaggio boys were also born in the Bay Area. He was playing pro ball at 17 and, when he came to the San Francisco Seals at age 22, Vince DiMaggio was also there. Bill moved up to the majors for nine games with the Pittsburgh Pirates in 1932. He spent most of 1933 and 1934 with the Kansas City Blues, coming up again to the majors for a spell in 1934 and all of 1935 with the Cleveland Indians, managed for most of that time by Walter Johnson. Bill was the same age as the Indians' top pitcher, Mel Harder. In 76 total big league games, he hit .198.

Bill spent 1936-1937 with the Milwaukee Brewers before starting his six-year run with the Hollywood Stars. While with the Brewers in 1936, he was given credit for his handling of pitchers, especially Tot Pressnell, as the Brewers had a successful season culminating in winning the Junior World Series. [1] Brenzel scouted for the St. Louis Cardinals for three years and the Brooklyn/Los Angeles Dodgers from 1951 until his death. He signed Ron Cey, Joe Ferguson, Von Joshua, and Lee Lacy, among others.