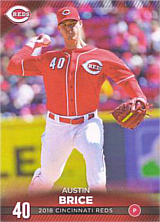 When he made his major league debut with the Miami Marlins on August 12, 2016, pitcher Austin Brice became the first person born in Hong Kong to play in the major leagues. He was born there when the city was still a British colony entirely separate from China.

Brice was a 9th round selection by the Marlins in the 2010 amateur draft, out of high school in North Carolina. He made his way slowly up the team's minor league ladder. spending two years each with the GCL Marlins, the Greensboro Grasshoppers and the Jacksonville Suns. Generally a starting pitcher, he put up some decent win totals, including three straight years with 8 wins from 2012 to 2014, the first two at Greensboro and the third with the Jupiter Hammerheads of the Florida State League. In 2015, he went 6-9, 4.67 at Jacksonville, in the AA Southern League and followed that by going 4-7, 2.89 in 27 games as a swingman for the same team in 2016. He then put up a 1.04 ERA in 5 relief appearances with the AAA New Orleans Zephyrs before getting the call to The Show.

In his first taste of the majors, Brice was 0-1, 7.07 in 15 relief appearances for the Marlins at the end of the 2016 season. On January 19, 2017, he was traded to the Cincinnati Reds, alongside fellow prospects Luis Castillo and Isaiah White, in return for major league starter Dan Straily. Brice spent two years in the Cincy pen, with ERAs of 4.96 in 22 games for 2017 and 5.74 in 33 games in 2018. After that season, he was waived off the 40 man roster. He spent the winter ping-ponging in DFA limbo, going from the Los Angeles Angels to the Baltimore Orioles before finally landing back where it all began, Miami, in February. He made 36 appearances in 2019 for the Fish, with a 3.43 ERA and 46 strikeouts in 44 2/3 innings. On January 16, 2020, he was traded to the Boston Red Sox in return for minor leaguer Angeudis Santos.