Note: This page is for 2010s pitcher Angel Castro ; for the member of the Salón de la Fama with the same name, click here. 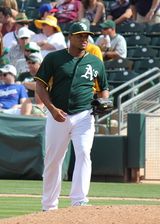 Much like Johnny Cash, Ángel Castro had been everywhere... making his big league debut at a spry 32.

In 2010, Ángel branched out, chucking with the independent Lincoln Salt Dogs (3-3, 3.16 in 6 games) and Dorados de Chihuahua (3-1, 4.70 in 5 games). He pitched in 2011 for the Saraperos de Saltillo of the Mexican League, finishing 4-4, 5.41, with 4 saves in 21 games. Next, it was time for some international play, suiting up with the Dominican national team for three appearances in the 2011 Baseball World Cup. Against Italy, he allowed only one hit (to Francesco Imperiali) and fanned seven in six shutout innings for a win. He gave up two runs in three innings in a no-decision start against the Australian national team. In his final outing, he relieved Juan Pena in the 10th of a 4-4 tie against South Korea; with the IBAF Extra Innings Rule, Korea started with two men aboard. After a sacrifice hit, Castro struck out Chang-min Mo and intentionally walked Jae-hwan Kim. He walked Ji-young Lee to force in the go-ahead run then struck out Hae-min Park. The Dominicans failed to score, giving Castro a 1-1 record for the Cup, and he was not retained for the 2011 Pan American Games.

And so, he moved along to Japan, signing with the Fukuoka SoftBank Hawks of Nippon Pro Baseball. Castro pitched three games in the Pacific League in 2012, allowing 3 runs (2 earned) and 5 hits in only 3 innings of work. He spent the rest of the year in ni-gun, going 3-2 with five saves and a 2.06 ERA; his 38 appearances led Hawks farmhands. It was time for a little bit of winter ball in his life: in the 2012-2013 Dominican League, he had a 4-1, 2.90 record for the Águilas Cibaeñas, finishing 5th in the league in ERA (between Lorenzo Barcelo and Tim Corcoran) and tied for third in wins. In the 2013 Caribbean Series, he moved to the Leones del Escogido, going 1-0 with a 1.84 ERA, allowing only 5 hits while striking out 14 in 14 2/3 innings, leading the Series in strikeouts, two ahead of Series MVP Luis Mendoza. He beat the Navegantes del Magallanes in the Series opener, allowing two runs in seven innings. He was then held until the finale, when he squared off with the Yaquis de Obregón and major league veteran Rodrigo López. Castro allowed just two hits in 7 2/3 innings, though he gave up two runs, one unearned thanks to a Jordany Valdespin error. He left with a 2-1 deficit and was the first of 10 Dominican hurlers in a 18-inning marathon, which Escogido lost, 4-3.

Ángel came back to the US and A, appearing in the 2013 WBC and then pitching at Triple A in the Los Angeles Dodgers organization. He took his talents to St. Louis' system in 2014, being dealt to the Oakland Athletics chain in August. He spent the rest of the season and the beginning of the next in Triple A before the big club came a courting. He made his big league debut on May 9, 2015, pitching 2/3 of an inning against the Seattle Mariners. Ángel only made 5 big league appearances, consisting of 4 innings, an 0-1 record and 2.25 ERA. He kicked around the Oakland system through 2016, then returned to the Mexican League for two final seasons.