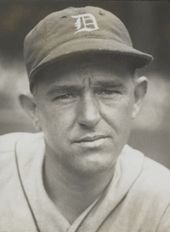 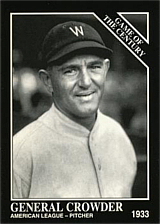 Alvin "General" Crowder pitched eleven seasons in the American League, winning 167 games. Not bad for a guy who only debuted at 27. In 1933, he was the second of three pitchers to take the bump for the junior circuit in the inaugural All-Star Game.

Crowder earned his nickname from General Enoch Crowder, originator of America's World War I draft lottery. For his part, Alvin Crowder served for three years in the Army during the war, spending time in the Philippines and Siberia. It was during his service that he learned to play baseball. He signed his first contract in 1920 but did not play his first game until 1922, a token appearance with the San Francisco Seals of the Pacific Coast League. Recording a 17-4 mark with a 3.84 ERA for the Southern Association's Birmingham Barons earned him his first big league look in 1926. He had attended spring training with the Pittsburgh Pirates that March, but he debuted on July 24th for their opposition in the 1925 World Series, the Washington Senators, allowing three runs (just one earned) in a complete game, 3-2 loss to the Detroit Tigers. He made 34 appearances with the D.C. squadron over the next two seasons to okay results, generally laboring in hopeless/mop-up situations, and was dealt to the St. Louis Browns during the 1927 season.

A fresh start in 1928 jump-started Crowder's career. Pitching 41 games, he completed 19 of 31 starts with a shutout and two saves, enjoying his first 20-win season (21-5) with a 3.69 ERA in 244 innings. He led the AL in shutouts with four in 1929, completing 19 of 34 starts with 4 saves in 40 games, tallying a 17-15, 3.91 record. Over the last two months, he went the distance in 12 of 14 starts while beating the (eventual) world champion Philadelphia A's three times and spinning two shutouts of the second-place New York Yankees. He seemed to be safe at the head of the Browns rotation. A slow start in the "Year of the Hitter", 1930, led to a role reduction; even after re-establishing himself, he was moved back to our nation's capital with Hall of Fame outfielder Heinie Manush for another Hall of Fame outfielder, Goose Goslin. Crowder returned to his workhorse ways and, combined, was 18-16, 3.89 with 2 saves in 279 2/3 innings. In a routine all too familiar, Crowder started the 1931 season slow. When the summer wind came blowing in, the heat returned to his heater, turning an early 0-4, 6.91 into a final 18-11, 3.88. He was boosted by a string of seven starts from August 30th to September 20th in which he went 7-0, tossed 6 complete games and beat the pennant-winning A's three times, lowering his ERA from 4.81 to 3.89 in the process.

In 1932, Crowder had his best big league season. The good times rolled immediately; on Opening Day against the Boston Red Sox, he pitched a ten-inning, 1-0 shutout at Griffith Stadium. He ripped off four straight wins with three complete games from April 30th to May 13th, with the last a two-hit shutout of the Detroit Tigers. He would not lose a game after July 28th, and was undefeated (the best that there can be) in the month of September. Making 8 starts, he won all of them, tossing 7 complete games and beating every team except his own in the process, with the Boston Red Sox falling twice. At season's end, Crowder had won a league-leading 26 games (26-13), made a league-leading 39 starts (out of 50 appearances), tossed 21 complete games and, in another league-leading tally, established a career high of 327 innings (without hitting a batter, a record that will not be threatened any time soon).

Boy wonder Joe Cronin, who just so happened to be dating owner Clark Griffith's niece, became skipper following the ouster of Walter Johnson following a second-place, 93-61 finish in 1932. Crowder was his man on Opening Day, in which game he tied the American League record for most consecutive wins, logging his 16th in beating the A's. The streak would be snapped in his next start, but he kept on rolling to success. He pitched the middle three innings of the All-Star Game at Comiskey Park, allowing two runs on three hits and surrendering the first home run in ASG history, to Frankie Frisch. The runs did not affect the outcome; Lefty Gomez earned the duke with a scoreless first three innings, a 4-2 AL victory. He was rocked in the World Series by the New York Giants, pitching to a 7.36 ERA in two starts as the Sens fell in five games. The year was his final great season; he again led the AL in wins (24-15) with a 3.97 ERA while making a league-high 52 appearances and tossing 299 1/3 innings.

Crowder would pitch in each of the next two World Series. Obviously, it would not be for the Senators. With his record standing at 4-10, 6.79 at the beginning of August 1934, the Detroit Tigers executed a waiver claim on him. He was not otherworldly down the stretch (5-1, 4.18) or particularly dominant in the Fall Classic battle with the St. Louis Cardinals (4 runs, 1 earned, in 6 innings), but he would be back battling on mostly guile for a final full season in 1935 (16-10, 4.26 in 33 games with 16 complete games). The third time in the World Series proved a charm; The General went the distance in Game 4, allowing only a run on five hits to the Chicago Cubs for a 2-1 victory and the Tigers won the series in six games, earning him his lone championship ring. The 1936 season was a nightmare from both a professional (4-3, 8.39 in 9 games) and personal standpoint (his wife would die before the season's conclusion). Instead of returning for 1937, he hung it up, finishing 167-115 with a 4.12 ERA in 402 games.