Baseball was a demonstration sport at the 1936 Summer Olympics in Berlin, Germany and featured a single game.

The single exhibition game was played on August 12, 1936 prior to the track and field competions between two American teams. The single nation arrangement had been made after the original matchup between Japan the United States was scrapped after the Japanese team withdrew. The two teams were named the "World Champions" and the "U. S. Olympics". The World Champions won, 6-5 in front of 90,000 spectators in Berlin's Olympic Stadium. The exhibtion was organised by Les Mann, who had pushed strongly for inclusion of baseball as an Olympic sport. He also served as the game's umpire.

Tryouts for the team were held in early July 1936 in Baltimore, MD. 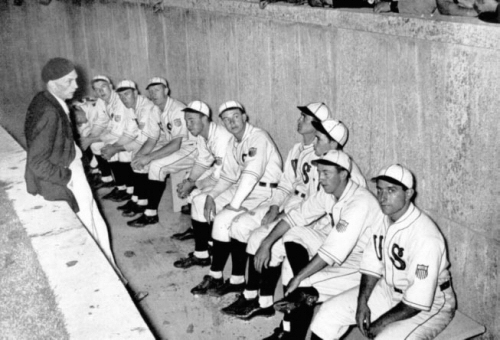 Fred Heringer started for the U.S. Olympics, while Bill Sayles started for World Champions. Hubert Shaw hit a 2-run inside-the-park home run in the top of the first inning. After giving up 2 runs in 3 innings, Sayles was relieved by Carson Thompson. At the end of six innings, the World Champions led 5 - 4. After the Olympics scored in the top of the seventh to tie the game at five; Les McNeese hit a walk-off solo home run in the bottom of the seventh to end the game. The final score was World Champions 6 - 5 U. S. Olympics.