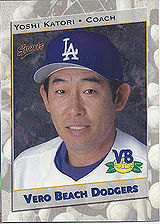 In 1990, Katori moved from the most successful team in NPB history to the dominant club of the era when he joined the Seibu Lions. In spring training, he plunked Benny Distefano, leading Distefano to throw his bat at Katori, leading to Benny's ejection. Katori had a fine year that season - starting on Opening Day, he had saves in ten straight chances, a NPB record at that point in time. He finished at 3-1 with a 3.00 ERA and 24 saves, leading the Pacific League in saves and save points and being named the Fireman of the Year in the PL. He pitched a scoreless inning in the Japan Series as Seibu swept his former club in four games.

In 2001, Katori was a coach for the Vero Beach Dodgers.