"Yank Robinson is playing a phenomenal second for the Browns." - stated by Sporting Life on April 20, 1887

"One of the best of the ambidextrous players was old Yank Robinson, of the St. Louis Browns, who could use his left as well as his right with equal accuracy in throwing." - from Sporting Life, August 22, 1896 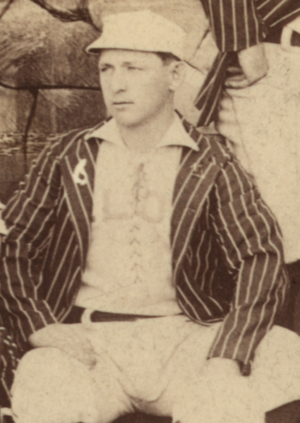 Yank Robinson was a member of the famous St. Louis Browns teams of the 19th Century American Association. He played all nine positions, but was mostly at second base.

He appeared four different years in the World's Series.

Robinson was good at getting on base - he led the league three times in walks, and was usually among the leaders in hit-by-pitch. His batting average, though, was usually a bit low.

The book Baseball by Harold Seymour relates an incident where Yank's disagreement with a gatekeeper led to "the most serious revolt ever known in a ball club" according to a newspaper of the time, much of it caused by Chris von der Ahe's actions.

The book The Beer and Whisky League has a photo of him. The book refers to him as the original Max Bishop, and states that in 1888 he became the first regular player ever to get more walks than hits. A December 1892 New York Times article says that Robinson went to winter training with a National League team (either St. Louis or Pittsburgh, both of which trained in the location mentioned by the article), but he didn't appear in the league in 1893. Per a New York Times article from August 24, 1893, Robinson claimed he would play again in 1894.

He died young at age 34, of tuberculosis, after being sick for three years. According to Sporting Life of December 19, 1896, Robinson made Patsy Tebeau, one of his closest friends, the executor of his will, and bequeathed part of his estate to Tebeau.