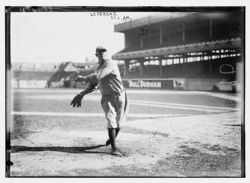 Leverenz had two dismal seasons for the Browns, going 6-17 as a rookie in 1913 and 1-12 in 1914 and, after nine games in 1915, returned to the minors. His downfall was the base on balls; he averaged almost five walks and only three strikeouts a game. (WAB)

He owned the Ford Dealership in Atascadero, CA from 1947 until he retired in 1958. He died following a stroke at age 84 at General Hospital in Atascadero, was cremated and is interred at Atascadero Cemetery.