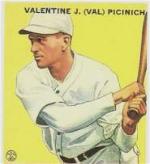 Val's obituary in the New York Times indicates he attended Princeton University for one year before signing with the Athletics and going straight to the majors. He then played with the Atlanta Crackers in 1917 and 1918 buts also saw major league time both years. After his major league days he managed in the minors (with the Milford Giants and Allentown Wings), owned a chicken farm, and worked for the Bath Iron Works Corporation in Bath, ME.

After his playing career ended, he was a Cincinnati Reds coach in 1934.