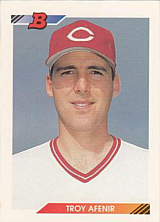 After being selected a couple of times in 1982 drafts, including second overall in January, Troy went to the Houston Astros in the secondary phase of the January 1983 amateur draft. His minor league career from 1983 to 1988 was in the Astros organization, as he spent 3 1/2 seasons in Single A ball and 2 1/2 seasons in Double A ball. He usually hit under .250, although with some power. Alan Ashby was the catcher in Houston when Afenir came up for his cup of coffee. He hit .300 in 20 at bats, but did not stick. In 1989, Afenir was traded to the Oakland Athletics, which were at the peak of their prowess, winning the division in 1989, 1990, and 1992. He came up for cups of coffee in 1990 and 1991 while Terry Steinbach was the starting catcher. Afenir mostly played at Double A and Triple A, hitting around .250 with moderate power. He signed as a free agent with the Cincinnati Reds, and played in Triple A with them, hitting around .250 again, and coming up to the parent club for 16 final big league games in 1992. As a big leaguer, he primarily wore number 52. He apparently played semipro ball in 1997 with the San Diego Waves and also played in Taiwan that year.

Afenir became an assistant coach at Palomar College in 2010 [1]. He later became a New York Yankees scout, signing Aaron Judge. Troy's nephew, Buck, was a catcher on the Kansas Jayhawks baseball team and played in the Yankees and Astros systems. Another nephew, Ty, played infield on the Washington Cougars and in the Yankees system as well. His son, Audie, caught at Palomar before transferring to Oral Roberts. He was drafted by the Yankees in 2015. A brother, Tom, played in the minors for the Cleveland Indians in 1995 and 1996.