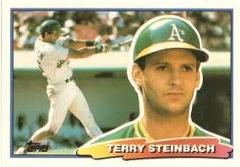 Terry Steinbach was signed as a 9th round pick in the 1983 amateur draft by the Oakland A's and scout Jim Perry. Steinbach was elected MVP of the 1988 All-Star Game although he was batting just .217 at midseason. His brother, Tom Steinbach, was a minor league outfielder in 1983.

He was a member of the unpredictably successful 9th round draft class of 1983, a fraternity whose members include three time All-Star and 300 save club member Jeff Montgomery, 10-year veteran Jeff Parrett, 15-year veteran and 300 home-run club member Jay Buhner, and 13-year veteran Glenallen Hill.

In 2013, Steinbach was named bench coach of the Minnesota Twins, also assuming duties as a catching instructor. He had been a spring training assistant for the Twins for 13 years before that, but had never held a coaching position in the major or minor leagues. He stayed in the position in 2014 but was dismissed after that season, along with Twins long-time manager Ron Gardenhire.