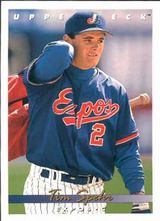 Tim Spehr was quite a slugging catcher in spite of his low lifetime batting average of .198. In spite of only having 556 lifetime at bats, Spehr managed to slam 19 home runs in the majors. Ironically, Spehr's best year in the majors was his last when he was with the Kansas City Royals in 1999. That year, Spehr had a batting average of .206, but in a mere 155 at-bats, he hit 9 home runs and drove in 26 runs.

Originally drafted by the Royals in the 5th round of the 1988 amateur draft, Spehr also saw action in the big leagues with the Montreal Expos, Atlanta Braves, New York Mets in addition to his three tours of duty with the Royals. With the Expos, he had made it his specialty to catch the very tricky forkball of reliever Mel Rojas, helping to turn it into a devastating weapon. He would almost be used as his personal catcher, entering games in the late innings when the Expos were in the lead and Rojas was likely to be used, either to save the game or to set-up closer John Wetteland. For example, in 1994, he played 46 games at catcher but started only 1, and in 1996, he played 58 games but started just 7. It was a rare example in recent years of a third catcher being used productively and not just warming the bench: Darrin Fletcher was the starter in those years, and either Lenny Webster or Tim Laker would get the start when he was being rested. The Mets attempted to do this again in 1998, after they had acquired a struggling Rojas the year before, but both Spehr and Rojas underperformed badly, and both were gone at the end of the year.