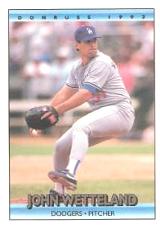 John Wetteland had 330 saves in his career and was one of the more dominating relief pitchers of his time: he led the majors in saves for the 1990s. A recovering alcoholic and vocal born-again Christian, Wetteland thanked his "point man Jesus Christ" upon accepting the 1996 World Series Most Valuable Player Award. John picked up the save in the 1999 All-Star Game. In 1996, he set a couple of very impressive records, first by recording a save in 24 consecutive appearances between May 31st and July 14th, and then by saving all four of the Yankees' wins in the 1996 World Series. Yet, he left the Yankees as a free agent after the season, joining the Texas Rangers, and opening the way for Mariano Rivera to become the Yankees' closer.

He was briefly the bullpen coach for the Washington Nationals in 2006 before being fired by Frank Robinson. He later became the Seattle Mariners bullpen coach.

On January 15, 2019, he was charged with abuse of a child under 14, after having been arrested the previous day and freed after posting a $25,000 bond, according to county records. This followed an investigation by police in Bartonville, TX, a suburb of Dallas, TX. The only details available stated the case had begun in 2004, when the child was 4, and had continued over the next two years. On March 28th, he was indicted by a grand jury on three charges of sexual assault of a child under the age of 14. After an arraignment hearing on May 14th, his attorney said Wetteland was stunned by the charges and maintained that he was completely innocent. The case went to trial in August 2022, and resulted in a mistrial caused by a hung jury on September 2nd.