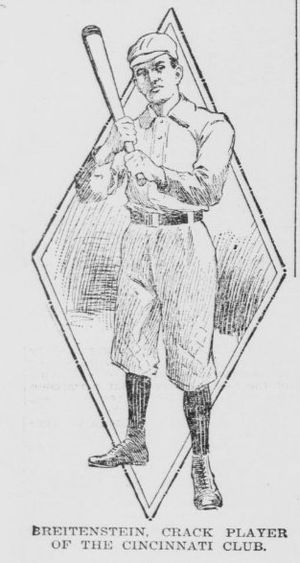 “Theodore Breitenstein was at one time the greatest left-handed pitcher in America.” - Alfred H. Spink, The Sporting News

Theodore Breitenstein played 11 seasons in the majors, winning 160 games. After his major league days, he pitched successfully in the minors until age 42.

Breitenstein reached the bigs with the St. Louis Browns of the American Association in 1891. Facing the Louisville Colonels on the season's final day, he threw a no-hitter. The Browns moved to the National League in 1892, and he struggled to a 9-19 mark. The next season, he paced the NL with a 3.18 ERA despite posting a 19-24 record. He went on to lose over 20 games in each of the next three seasons, leading the NL with 30 losses in 1895. After the 1896 season, Breitenstein was sold to the Cincinnati Reds. He won 23 games in his first year with the team. Facing the Pittsburgh Pirates on April 22, 1898, he threw the second no-hitter of his career, and he ended that year with 20 wins. After four summers in Cincinnati, he ended his big league career with the St. Louis Cardinals in 1901.

Although primarily a pitcher, Breitenstein typically appeared in a few games in the outfield each season, with a peak of 16 in 1895. He generally was not a strong hitter, except in 1899, when he hit .352 in 105 at-bats. He also umpired a couple of games as a fill-in in 1900.

After his major league years, Breitenstein pitched 11 more seasons in the minors, mostly in the Southern Association, winning 165 games. He won 21 games for the Memphis Egyptians in 1902 and pitched eight seasons for the New Orleans Pelicans starting in 1904. He twice won 21 games for New Orleans and threw a no-hitter for the team in 1909. It is said he was kicked by a horse and the injury caused him to miss the first part of the 1907 season. Following his playing days, Breitenstein umpired in the minors in the Southern Association and Texas League. He later engaged in business in his hometown of St. Louis and worked for the city parks department.