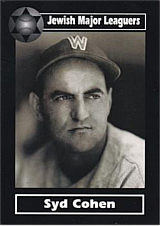 Syd Cohen pitched 56 games with the Washington Senators between 1934 and 1937.

Syd Cohen as a hitter and as Pablo[edit]

The brother of big league second baseman Andy Cohen, Syd made his pro debut in 1928 as a position player, hitting .296 in the Three-I League. The next year, Cohen played for two teams in the Arizona State League, batting .263 with 6 homers. In 1930, Syd hit .356 for the Bisbee Bees in that circuit. Cohen went to the Mexico-based Nogales Internationals in 1931 in the Arizona-Texas League. The club had faced local unrest due to their reliance on American players. When Cohen arrived, the manager decided to introduce the swarthy, fluent Spanish speaker as Pablo Garcia. "Pablo" hit .323. The next year, he went to play for his hometown El Paso Texans and hit .302. He also saw brief action with the Oakland Oaks.

Syd Cohen as a pitcher[edit]

In 1933, Cohen began to pitch regularly, going 1-3 with a 5.89 ERA for the Portland Beavers and Hollywood Stars. The next season, he fared even worse with the Minneapolis Millers, posting a 2-0 record but an 8.76 ERA. He fared better with the Chattanooga Lookouts that year, going 11-10 with a 3.26 ERA. Amazingly, given his track record in the top minor leagues, he wound up with the Washington Senators late in [1934 Senators|1934]] and allowed Babe Ruth's final home run as a member of the New York Yankees. He also became the last pitcher to strike out Ruth during his New York career. Syd returned to the Lookouts in 1935 and went 16-16 with a 4.73 ERA. In addition to a 7-8, 2.94 campaign for Chattanooga in 1936, Syd spent a fair portion of the year with the Senators, with a 5.25 ERA in 19 games. The next season, 1937, Cohen was one of the top Washington hurlers, going 2-4 with 4 saves and a 3.11 ERA, the best of any pitcher to appear in 10 or more games with the team. Despite a 143 ERA+, Syd had pitched his last season in the majors.

Syd Cohen on the west coast[edit]

Syd was with El Paso once again in 1947 and had one of his best seasons ever. At 41, he was 17-5 with a 3.38 ERA, finishing second in the Arizona-Texas League in wins and either first or second in ERA. After a year off, he slipped to 8-17 with a 4.86 ERA for the Texans. Cohen went to Ciudad Juarez, Chihuahua in 1950 and managed the Juarez Indios to their first title in the Arizona-Texas League. Cohen did not help on the mound, going 3-6 with a 7.10 ERA. Fans recalled him as Pablo Garcia and greeted him with his old moniker. After that, Syd spent three years with the Bisbee-Douglas Copper Kings and went 4-13 from age 45 to 48. He spent his last two seasons as a player back home with El Paso, not getting any decisions. Cohen continued to manage in the minors, including a 1957 stint back with Ciudad Juarez, now in the Central Mexican League. As both Syd and brother Andy had been active in minor league baseball in their hometown for many years, El Paso named their new ballpark in memory of the two when they opened Cohen Stadium in 1990.