"Captain Sid Farrar's general work is undoubtedly the best of any player in the Eastern Association." - Sporting Life, July 25, 1891 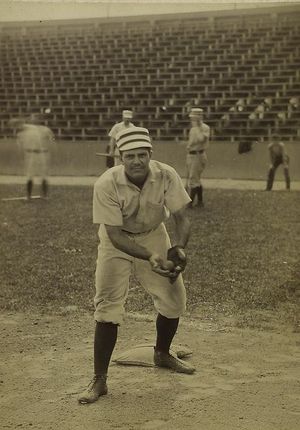 Farrar at the ballpark.

Sid Farrar, who played eight major league seasons, is known as the father of famous opera singer and actress Geraldine Farrar. The book Diamonds in the Rough claims that Farrar and other ballplayers (as well as eventually people outside of baseball) began saving tinfoil wrappers for their re-sale value in order to pay for Geraldine's singing lessons.

Geraldine Farrar was a big star during her life, famous as an opera singer in New York for years and also appearing in movies and advertisements and making many recordings. She was linked romantically with the conductor Arturo Toscanini and possibly with her close friend Enrico Caruso, the opera singer. For years, as a child, she was in the press as Sid Farrar's daughter, and then later he became described in the press as Geraldine Farrar's father.

Sid was born in Paris Hill, ME, 50 miles north of Portland, ME. He was only the seventh major leaguer born in Maine. One source [1] says he was named after the then-governor of Maine, who was a friend of his father.

All his major league seasons were spent in Philadelphia, mostly with the National League's Philadelphia Quakers and at the end one season with the 1890 Philadelphia Athletics of the Players League. He was a complete unknown when he won the starting first base job for the Quakers in 1883, their first season in the National League. His earlier playing experience seems to have been with a semi-pro team in Stoneham, MA.

A regular each year, Farrar played exclusively one position in the majors: first base. His range was excellent and his fielding percentage was above average. He was not a great hitter, but neither was he an embarrassment. In 1888 he led the National League in hit-by-pitch and also was among the leaders in doubles. Because he made his reputation with his glove, there is no photo of him holding a bat, and it is not known whether he batted right or lefthanded. It is very rare to be missing this piece of information for a player with such a long career (he played 943 major league games).

Here is a baseball card of Sid Farrar and here is another one. The book Baseball: An Illustrated History also has a photo of him.

He and Frank Selee opened up a clothing store after Sid's baseball days.

He was sometimes called Sidney in the press.

An article, Baseball Salaries Thirty Years Ago, by William H. Dunbar, showed Farrar as earning $900 up to $2,000 per year during his major league career. His salaries were among the lowest of the prominent players listed - for example, Connie Mack earned $2,750 in 1889, while King Kelly got $4,000 and Dan Brouthers earned $4,700.

It was reported that when Geraldine wed in 1916, Sid had to be propped in bed to view the wedding as he had just come home from the hospital. The article in the Oswego Daily Palladium did not state the cause of the hospitalization.

A biography of Farrar claims that he played pro ball as early as 1879 for a team in Philadelphia, but eventually gave up baseball in order to give his daughter a musical education. Sid, who was "a friend of the factory worker", ran for the board of selectmen of Melrose, MA over great opposition by some citizens and won. He later moved to Ridgefield, CT, and owned a farm. He served as director of a local bank. The road called Farrar Lane in Ridgefield was named after him.

Both Farrar and his wife were apparently talented singers, with his wife having given up singing ambitions when she got married.