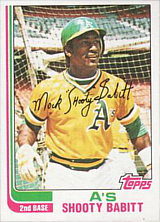 "If you ever see Shooty Babitt play second base for me again, I want you to Shooty me." - Billy Martin

Shooty Babitt was born March 9, 1959, in Oakland, California. He attended Berkeley High School in California. In his senior year, he was named to the all-Northern California team along with Greg Zunino, whose son, Mike, was a first round pick of the Seattle Mariners two and a half decades later. In the 1977 amateur draft, the Oakland A's took Shooty in the 25th round.

Despite his modest numbers at Triple A in 1980, Babitt took advantage of an opening at second base with the big league A's in 1981. He was the Opening Day starter at second base and did well at the beginning, hitting close to .300 until mid-May. After the midseason strike, he remained the team's second baseman until September, when he made only one start in the second game of a doubleheader. In 54 games, his final line was .256/.314/.301 in what was his lone season in the big leagues. It was clear that the A’s would go another direction at second base in 1982. His defense was especially an issue as he turned only 5 double plays. In September and the postseason, it was Dave McKay and Keith Drumright who manned the position.

Babitt began the 1982 campaign with the Tacoma Tigers, in the PCL. He was not doing too bad, playing second base and hitting .290 although without much power or plate discipline when he was released in June. He was picked up by the Montreal Expos organization in a year in which their second base position was a mess, which of course had repercussions at the Triple A level with the Wichita Aeros in the American Association. Babitt played 31 games with Wichita, hitting .282. He played the 1983 season with both Wichita and the Memphis Chicks in the Southern League. His overall stats were the best of his career. In 121 games, mostly at second but also in the outfield, his combined OPS was .759 with a career-high 19 stolen bases. His playing time was cut significantly in 1984 with the Indianapolis Indians in the American Association. He was a utility player with most of his time in the outfield. His line was .230/.345/.303 in 55 games when he was released in June.

After his playing career, Babitt remained in baseball. He was a longtime scout with the Arizona Diamondbacks. In 2008, he moved to the New York Mets. He also worked as a TV analyst for the Oakland A's, beginning in 2008. His son, Zach Babitt, was drafted by the Chicago White Sox in the 2007 amateur draft out of high school but chose to attend college. Zach was then drafted by the Los Angeles Dodgers in the 2012 amateur draft, signed with the Dodgers and played two seasons in the low minor leagues.