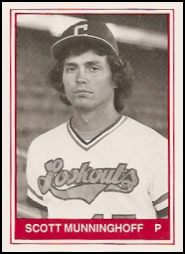 In 1980, his 4 games came early in the season. The Phillies went on to win the 1980 World Series. Munninghoff, Eric Cammack and Eduardo Rodriguez are the only pitchers ever to hit triples in their first and only career at-bats. With the Oklahoma City 89ers in the American Association that year, Munninghoff went 4-9 with a 5.90 ERA.

After the 1981 season, the Phillies sent him to the Cleveland Indians as the player to be named later in the Bo Diaz three-team trade, but he never appeared in the majors for the Indians, playing for their Double A team, the Chattanooga Lookouts, and their Triple A team, the Charleston Charlies, during the 1982 season. At age 23, he was finished with professional ball.