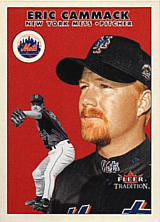 Eric Cammack, who pitched 10 innings for the New York Mets in 2000, had a solid minor league career from 1997 to 2004. A reliever, his highest minor league ERA before he reached the bigs was 3.12. He struggled with an arm injury during the latter part of his career. Cammack did not record a decision in his eight games in the majors. On June 30th, the Mets scored 10 times in the bottom of the 8th inning to beat the Atlanta Braves 11-8. Cammack, who had pitched the top of the inning, was in line for the win - but since he had allowed three runs, the official scorer awarded the W instead to Armando Benitez, who pitched the 9th.

Cammack, Scott Munninghoff, and Eduardo Rodriguez are the only pitchers ever to hit triples in their first and only career at-bats.