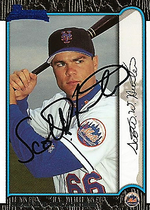 Outfielder Scott Hunter played in the minor leagues from 1994 to 2003, having been taken by the Los Angeles Dodgers in the 5th round of the 1993 amateur draft. He was signed by scout Bob Miske. He began his career with a .316 batting average for the rookie level Great Falls Dodgers in 1994.

On August 18, 1995, Hunter was traded with outfielder Dwight Maness to the New York Mets for outfielder Brett Butler. He reached 40 or more stolen bases twice, in 1996 and 1998, while showing good pop -- he hit as many as 17 home runs in a season. He reached Triple A each year from 1998 to 2001 and Baseball America ranked him the #10 prospect in the Mets system going into the 1999 season. 2003 was his final campaign, which he spent in the independent Northeast League.

He later became a scout, working as regional scouting supervisor and and crosschecker for the New York Mets from 2009 to 2013 and in lesser roles from 2004 to 2009. He signed Darin Gorski, Zach Lutz and Kevin Mulvey. In 2005 and 2006, he worked as a coach for the GCL Mets and Brooklyn Cyclones, respectively. He then joined the Seattle Mariners organization, serving as crosschecker beginning in 2014. In 2016, he was named Director of Amateur Scouting.

This page is in need of some additional content. Please help the Bullpen by expanding it, or learn how to contribute.
Retrieved from "https://www.baseball-reference.com/bpv/index.php?title=Scott_Hunter&oldid=1060298"
Categories: