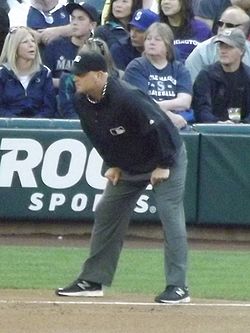 He worked the 2006 World Baseball Classic.

In 2011, Barry was promoted to the major league umpiring staff as a part of John Hirschbeck's crew. He worked his first postseason series in 2012, and was on the crew that worked the 2014 All-Star Game.

On August 26, 2017, he made an egregious mistake while working home plate in a 16-3 blowout win by the Baltimore Orioles over the Boston Red Sox at Fenway Park. In the top of the 9th, Mitch Moreland moved from 1B to the mound to pitch the final inning, while Hanley Ramirez came off the bench to play first. This meant that the Red Sox had forfeited the use of the designated hitter for the remainder of the game, and that Ramirez was now batting in DH Chris Young's spot. But in the bottom of the inning, when the spot came up, it was Young who stepped up to the plate and not Ramirez, and he hit an infield single. No one objected and the play was left to stand, which means that Young is officially credited with having re-entered the game as a pinch-hitter for Ramirez. If Young had simply been batting out of turn, Barry would have been right not to intervene and let the victimized team object if it was in its advantage to do so. However, this was not the case, as Young was an illegal batter; Barry should have prevented him from re-entering the game immediately, but instead allowed the game to proceed, creating the unprecedented situation.