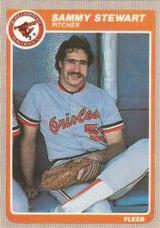 Sammy Stewart is best known for his eight years with the Baltimore Orioles, from 1978 to 1985. In his major league debut against the Chicago White Sox in the second game of a doubleheader on September 1, 1978, he struck out 7 consecutive batters - then the major league record for consecutive strikeouts in a debut game. Some sources say he struck out the first seven batters he faced, but that is incorrect: he allowed a couple of baserunners in the 1st, before beginning his streak in the 2nd. He had a very unusual and effective pick-off move to second base when he first came up; instead of turning counter-clockwise to throw to second, as most right-handed pitchers do, having to do a three-quarter turn since pitchers will pitch from the stretch with a baserunner on second, he would simply rotate his hips clockwise and flick the ball to second while hardly using his legs. It took a while for opposite runners to learn to adjust to the move.

Stewart and Steve McCatty were the two pitchers involved in the famous "rounded-off ERA" controversy at the end of the 1981 season. Major league baseball at the end of each season used to round off innings pitched to the nearest inning, until that turned out to alter the outcome of the 1981 championship for the lowest ERA. Another interesting tidbit about that year was that Stewart qualified for the ERA title while making only 3 starts. He was used largely in long relief and was very effective, with a 2.32 ERA in 112 1/3 innings.

Stewart was an important middle reliever for the O's in Baltimore's World Series win of 1983. He appeared in three of the five games in the victory over the Philadelphia Phillies, recording holds in Games 3 and 4 that were later saved by closer Tippy Martinez.

In 1989, Stewart played for the St. Petersburg Pelicans and Bradenton Explorers of the Senior Professional Baseball Association.

A self-described crack addict, he was charged 46 times with more than 60 offenses between 1988 and 2006: his first six prison sentences totaled 25 months. In October 2006, at Buncombe County Superior Court, in North Carolina, he pleaded guilty to being a habitual felon, felony drug possession and failure to appear in court on a felony. He was sentenced to "between 80 and 105 months". After that trial, the District Attorney said: "It's a very sad situation. I've known Sammy Stewart for probably 20 years. We've dealt with him here in the court system for years, and he would get caught and make promises and not follow through. He's a fellow that had all the opportunities in the world and made a lot of money. We're just not going to deal with him up here anymore, at least for the next 80 months."

He was released from prison in 2013 and settled in Hendersonville, NC. He continued to be in trouble with the law, although mostly for petty offences like trespassing. His two children from his first mariage both died young from cystic fibrosis, his son Colin in 1991 and his daughter Alice in 2016; he had two other children from another relationship. He was found dead at his residence on the morning of March 2, 2018, at the age of 63.

He was nicknamed "the Throwing Swannanoan" after his hometown of Swannanoa, NC and contemporary college football quarterback Jack Thompson, who was from American Samoa and was known as "the Throwing Samoan".