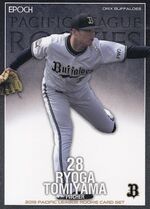 Ryoga Tomiyama has pitched in Nippon Pro Baseball and for the Japanese national team.

He was with Toyota Jidosha in the industrial leagues after high school. He pitched for Japan in the 2018 Asian Games. In his debut, he closed out their win over Pakistan, relieving Yudai Aranishi and retiring Muhammad Zakir, Muhammad Rafi and Muhammad Hussain. He then got the start in the Gold Medal Game against a strong South Korean national team. He walked Jung-hoo Lee and Ha-seong Kim, then Jae-hwan Kim singled. He recovered to retire former major leaguer Byung-ho Park but Chi-hong An singled in a pair, to hand Tomiyama the loss. He got another ex-big leaguer, Hyun-soo Kim, before Makoto Hori took over. [1]

The Orix Buffaloes took him in the 4th round of the 2018 NPB draft. [2] He spent most of the season on the farm (4-2, 3.00 in 14 G, .96 WHIP, 25 K in 24 IP) and got into one game for the big club. Relieving Nobuyoshi Yamada, he closed out a 4-1 loss to Nippon Ham by retiring all six batters he faced (Akihiro Hakumura by K, Haruki Nishikawa, former major leaguer Kensuke Tanaka, Ryo Watanabe by K, Taishi Ota, Kotaro Kiyomiya). [3]

The southpaw's fastball peaks at 91 mph and he throws a curveball. [4]