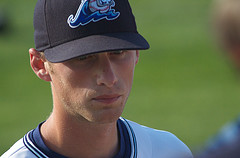 First baseman Ryan Strieby made it to AA in 2009. His brother Karsten Strieby was drafted in 2011.

Transferring to the University of Kentucky, Strieby batted .343/.473/.704 with 20 home runs, 59 runs and 77 RBI in 59 games. He was 5th in NCAA Division I in RBI and tied for 11th in homers. He was the All-Conference first baseman and Player of the Year in the prestigious Southeastern Conference, beating out Pedro Alvarez, David Price and J.P. Arencibia among others. He also led the SEC in doubles (tied with Chris Coghlan) and was two homers behind SEC leader Alvarez. Collegiate Baseball and the American Baseball Coaches Association named him the All-American first baseman;Baseball America also chose him as a first-team All-American, but at DH rather than 1B.

He was then chosen by the Detroit Tigers in the fourth round of the 2006 amateur draft. Signed by scout Harold Zonder, he made his pro debut that summer with the Oneonta Tigers, producing at a disappointing .241/.319/.335 rate. Baseball America did not name the SEC Player of the Year as one of the New York-Penn League's top 20 prospects.

He spent 2008 with the Lakeland Flying Tigers and led the Florida State League with 29 home runs and 94 RBIs despite missing the last portion of the season with a sprained wrist. He led Detroit farmhands in RBI as well. He also finished second in the FSL with 55 extra-base hits (7 behind leader Juan Francisco) and a .563 slugging percentage (.014 behind Brian Dopirak). He had a .278 average and .352 OBP. He was also named Detroit's Minor League Player of the Year. He failed to make the FSL All-Star team as Logan Morrison was picked at first. Baseball America named him Detroit's best power prospect.

He played the next year with the Erie Sea Wolves and hit .303/.427/.565 with 19 homers and 58 RBI in 86 games, again missing time with wrist injuries. Had eh qualified, he would have been 6th in the Eastern League in average, only .002 behind OBP leader Brock Bond and .011 behind slugging leader Dopirak. He again failed to crack a Baseball America list of the top 20 prospects in his league.