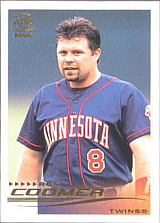 Ron Coomer was an American League All-Star in 1999 who persevered in the minors to enjoy a nine-year MLB career. He is a cousin of Garrett Jones, who also had a long minor league career before establishing himself in the majors.

Born in Chicago, he attended Lockport Township High School before he was selected in the 14th round of the 1987 amateur draft. He spent nine seasons, 1987 to 1995, in the minor league systems of three organizations before he got his first chance in the majors at age 28. He hit over .300 at six stops in the minors, often along with good power. While he had hit quite well in the Chicago White Sox organization in 1992 and 1993, the White Sox had Frank Thomas and Robin Ventura at the corners, so Coomer had no chance at a job. Sent to the Los Angeles Dodgers' organization in a minor league trade, he was a Pacific Coast League All-Star in both 1994 and 1995 but never got to play with the big club.

After his playing career, he was a baseball analyst for a TV station in Chicago and a broadcaster for the Minnesota Twins with Fox Sports Net. Beginning in 2014, he joined the Chicago Cubs Radio Network as color commentator, partnering with Pat Hughes.