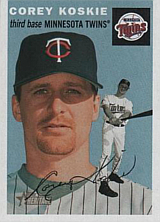 Corey Koskie was the first Manitoba born and bred baseball player to ever reach the major leagues. He suffered a career-ending concussion in 2006 while attempting to catch a pop-up with the Milwaukee Brewers. Post-concussion symptoms kept him out of the game in both 2007 and 2008. He attempted a comeback with the Chicago Cubs in spring training 2009 after being on the roster of Team Canada for the 2009 World Baseball Classic, but he officially announced his retirement on March 21st. He stated that he did not wish to risk his health. He was 1 for 5 with a double in his brief comeback attempt.

Through 2014, he was 7th in homers by a Canadian in the majors, 7th in OBP and 8th in slugging, played the most major league games of anyone from Manitoba and had the best average and most home runs and RBI of any third baseman from Canada. He was inducted into the Canadian Baseball Hall of Fame in 2015.