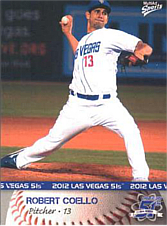 Robert Coello reached the major leagues in 2010 after being released by two organizations and switching positions. He pitched 28 times over parts of three seasons.

Robert started 2010 well with the Portland Sea Dogs (4-1, a save, 3.32, 51 strikeouts in 43 1/3 innings). Promoted to Pawtucket, he went 3-5 with a 4.22 ERA, striking out 79 while walking 30 in 64 innings and allowing only a .192 average. That earned him a September call up, where he had a rough entry to the big leagues. In his first outing, Coello relieved Jon Lester with an 11-2 lead in the 7th. Dan Johnson greeted the rookie with a single. Kelly Shoppach flew out, but Matthew Joyce singled. Pinch hitter Willy Aybar singled, then fellow pinch-hitter Brad Hawpe drew a full-count bases-loaded walk to force in a run. Pinch-hitter Desmond Jennings drew a four-pitch walk to force in a run, then Coello was yanked in favor of Dustin Richardson, who also walked in a run. He finished his first day in the bigs with a 81.00 ERA. He made 5 more appearances, all in relief, bringing his ERA down to a more palatable 4.76.

On February 15, 2011, the Red Sox traded Coello to the Chicago Cubs for Tony Thomas. He split the season between the AA Tennessee Smokies (4 games) and the AAA Iowa Cubs (30 games) with an overall record of 7-8, 4.19 in 34 games, including 15 starts, but did not get the call back to the bigs. After the season, he signed as a free agent with the Toronto Blue Jays. He pitched 19 times with the AAA Las Vegas 51s in 2012, with a record of 4-1 and an ERA of 3.00, but his stint in the majors was not as good, with an ERA of 12.79 and a loss in 6 appearances. In 2013, he moved back to the Angels organization and began the year back in AAA, with the Salt Lake Bees. He went 1-0 with 4 saves and a 4.82 ERA in 15 games before getting the call to Anaheim on May 10th. On May 23rd, he picked up his first career save when he took over in the 9th for a struggling Ernesto Frieri, who had just given up a pair of runs and put two more runners on, with the Angels clinging to a 5-4 lead over the Kansas City Royals; Coello retired Alcides Escobar on a fly ball to end the game. He had been pitching well since returning, having allowed only two hits and no runs in his first seven innings of work. A lot of his recent success was the result of mastering an "old-school" pitch, almost extinct by that point in time, the forkball, which he managed to control while giving it huge downward movement. In his lengthiest big league stint, 16 games, he finished 2-2 with a 3.71 ERA and 23 strikeouts in 17 innings. He spent the next two seasons exclusively in the minors, finishing his career with 12 starts for the 2016 Nexen Heroes of the KBO. He was 6-5 with a 3.77 ERA when he was waived and released that June.