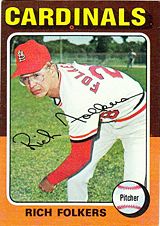 Even before entering professional baseball, Rich Folkers was a highly touted athlete. He attended both Ellsworth Community College and Parsons College, and was originally drafted by the San Francisco Giants in the fourth round of the 1966 amateur draft. Deciding not to sign, he was drafted by the Chicago White Sox and New York Mets in 1967 at different times. The White Sox chose him in the third round of the secondary phase of January draft, while the Mets took him in the first round of the secondary phase of the June draft with the 20th pick of that phase. Folkers decided to sign with the Mets.

First glimpse of the Majors[edit]

Folkers got his first call up in 1970 with the Mets. On June 10th, at the age of 23, Folkers pitched two solid innings in relief against the Houston Astros, giving up only one hit and allowing no runs. The success he achieved in that game did not carry over to the rest of the year: in 16 games, his ERA was 6.44. He also walked 25 batters and only struck out 15 in 29 1/3 innings of work.

He spent all of 1971 and most of 1972 in the minors. After a lackluster 1971 season (7-11, 4.50 ERA), the Mets traded away their former draft pick, along with Jim Bibby, Charlie Hudson and Art Shamsky, to the St. Louis Cardinals for Jim Beauchamp, Chuck Taylor, Harry Parker and Chip Coulter on October 18th.

He did better overall in 1972 in the minors, posting a 3.10 ERA. He was recalled to the majors that year, pitching nine games in relief for the Cardinals. This stint in the majors was much more successful: not only did he collect his first big league win on September 30th against Ron Santo, Rick Monday and the rest of the Chicago Cubs, he also posted a respectable 3.38 ERA.

Back to stay in the Majors[edit]

Folkers was used both as a starter and reliever in 1973, posting a solid 3.61 ERA in 34 games (nine of them started). If 1968 was his best professional season, then 1974 was his second-best professional season. He posted a 6-2 record in 55 relief appearances, which were third-most on the team. He also posted a 3.00 ERA, which was 0.59 points better than the league average.

"Rich Folkers is throwing up in the bullpen..." - Jerry Coleman, in one of his many turns of phrase as a Padre broadcaster

His tenure with the Padres was not nearly as successful as his time with the Cardinals. His first year with San Diego, 1975, ended with him posting a 6-11 record and a 4.18 ERA for a team that went 71-91 overall. He started 15 games that year, six more than his previous high. He showed respectable control that year, walking only 39 in 142 innings of work. However, he was also 10th in the league in wild pitches, with nine thrown. His final season with the Padres was 1976. The 29-year-old posted a 5.28 ERA that season in 59 2/3 innings of work.

He was selected off waivers by the Milwaukee Brewers on March 23, 1977. Overall, he threw just over six innings for the Brewers that year, posting a 4.26 ERA. Folkers played in his final big league game on June 8th, 1977. In March 1978, the Brewers traded him with Jim Slaton to the Tigers for Ben Oglivie. The Brewers definitely got the better end of that deal - Folkers never appeared in a big league game with the Tigers, while Slaton only pitched one season with them (it was, however, arguably his best season as he went 17-11 that year with a 3.89 ERA) before being reclaimed by the Brewers when he entered free agency after the season. Oglivie, on the other hand, went on the have the best years of his 16-season career while with the Brewers, hitting as many as 41 home runs in a season.

Statistically speaking, Folkers is most similar to Danny Coombs.

The uniform numbers that Folkers wore in his career were 38, 28, 26 and 45. The batter Folkers faced the most in his career was Al Oliver. Oliver hit .214 in 28 at-bats against Folkers.

At last check, he lived in St. Petersburg, Florida.

He once started against Andy Messersmith of the Los Angeles Dodgers, prompting one wag to comment that the game sounded like a WWI dogfight, referring to the aircraft makers Fokker and Messerschmidt.