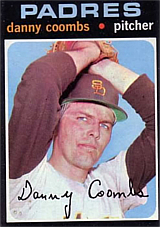 Seton Hall basketball star Danny Coombs sought baseball glory upon signing with the Houston Colt .45s for the 1963 season. He raced quickly to the majors, making his debut that year. On September 27th, against the New York Mets, he pitched 1/3 of an inning, allowing three hits and one earned run. Against the first batter he faced, Al Moran, he threw a passed ball. Moran then singled, and Al Jackson and Joe Christopher quickly followed with singles. That was the only game he pitched that year. Danny had two serious looks with the soon to be Astros, crafting a 4-3, 3.28 record in 40 outings (primarily in relief) in 1968.

Statistically, the player most similar to him is another former Padre, Rich Folkers, according to similarity scores (through 2019).