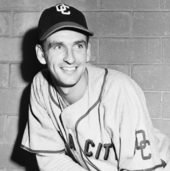 Canadian-born Ralph McCabe spent ten seasons in professional baseball from 1941 to 1953. The right-hander pitched until 1946, six seasons, before getting his first and only chance at the major leagues. Prior to his big league look, he put together three good years, two of them double-digit win seasons. He went 10-8 in 1942 with the Harrisburg Senators of the class B Interstate League and 13-4 in 1945 in a split-season affair with the Wilkes-Barre Barons and the Albany Senators of the class A Eastern League.

1946 rolled around and McCabe spent most of the season with the Oklahoma City Indians of the AA Texas League, going 10-7 with a 3.79 ERA in 28 appearances. On September 18, 1946, he made his big league debut with the Cleveland Indians. He pitched four innings, allowed five hits, three of them home runs, walked two batters and lost his only appearance with a 11.25 ERA. Needless to say, this was also his only appearance in the big leagues.

Ralph spent four more seasons in the minors, having a good 10-5 year with the Sherbrooke Athletics of the Provincial League in 1948. He also fared well with the Longview Texans of the East Texas League in 1949, when he had his best numbers, as he won 13 and lost 2, with a 2.20 ERA while appearing in 21 games, helping his team to the league title. McCabe was out of the game for three seasons from (1950-1952), tried a brief return in 1953 with the St. Hyacinthe A's, went 0-2 and called it a career. He ended his ten-year minor league run with an 82-55 record for a .599 winning percentage while appearing in 219 games.

After baseball, Ralph Herbert McCabe returned to his native Canada where he worked and lived until his death on May 3, 1974 in Windsor, ON CAN.